St. Mary's attracts young women from all over the Portland/Vancouver metro area, and transportation can be a challenge, especially for families juggling complicated schedules. Let us help you with this! Please see below for some options and answers to the VERY important question of "How am I going to get my daughter to school?"

Whether studying in the Commons, working out in the Fitness Center, studying in the library, or sticking around for a sports practice, choir or theatre rehearsal, our doors are open for your daughter both before and after school. Students have access to the building as early as 7:30 am, and after school, your daughter will have a safe space to be productive until her ride arrives.

In collaboration with the Oregon Department of Transportation, St. Mary’s Academy uses the carpooling software called SchoolPool. This software is part of ODOT’s larger Get There program that allows Oregonians to compare commute options, find a carpool, track environmentally conscious stats, and more!

SchoolPool is housed within the Get There website. Families opt into SchoolPool during enrollment and gain access to connect with other St. Mary’s Academy families. Think of this as a snazzy, geographical school directory that makes connecting with current families incredibly easy!

View the SMA Schoolpool Information video for a sneak peak!

Our campus is easily accessible by a variety of public transportation routes including the yellow, orange and green MAX trains, TriMet buses, the Portland Streetcar and C-TRAN buses. The PDX Bus app and TriMet website provide current arrival times and trip-planning options. Many students use map apps such as Google Maps to find the easiest route to a new location. With step-by-step instructions, these apps are as simple as GPS!

TriMet continues to be a popular option, and for many parents, their daughters' first trip on TriMet can be intimidating. We asked parents and students to share their experiences commuting to SMA. 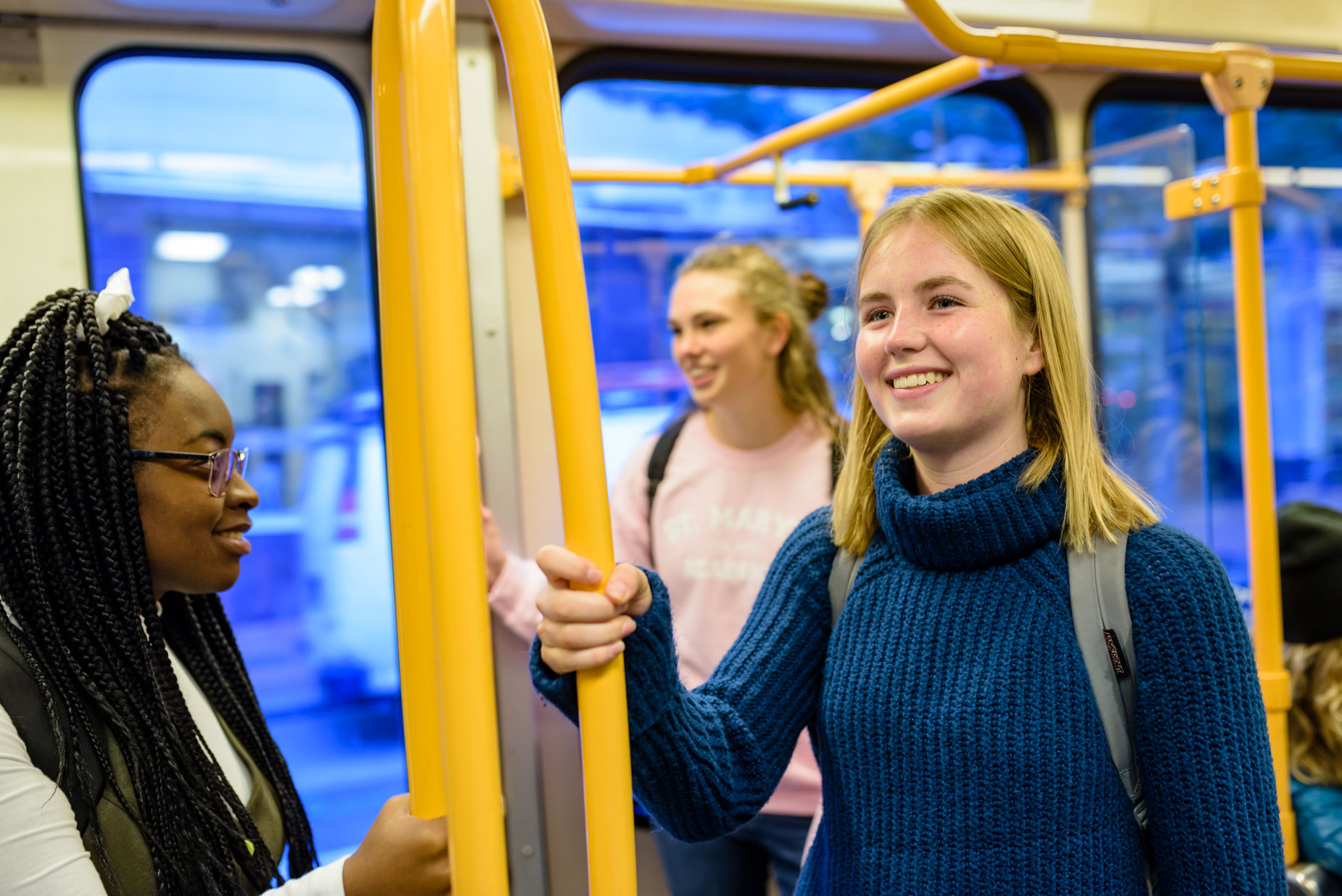 "The summer prior to my daughter starting her freshman year, we practiced taking TriMet from our neighborhood in NE Portland to St. Mary’s. We have two bus lines near us so we tried both to make sure she knew where she was going. Even though we practiced in the summer, I was still nervous about her taking TriMet early in the morning. On the first day of school, I rode the bus with her and it turned out the bus was filled with other SMA girls. Its seemed that there was a St. Mary’s student picked up at each stop. There was even an SMA teacher on the bus! After that first 'real' ride, I felt completely comfortable because so many other students were on the bus along with business people going to and from work."
Parent of SMA graduate 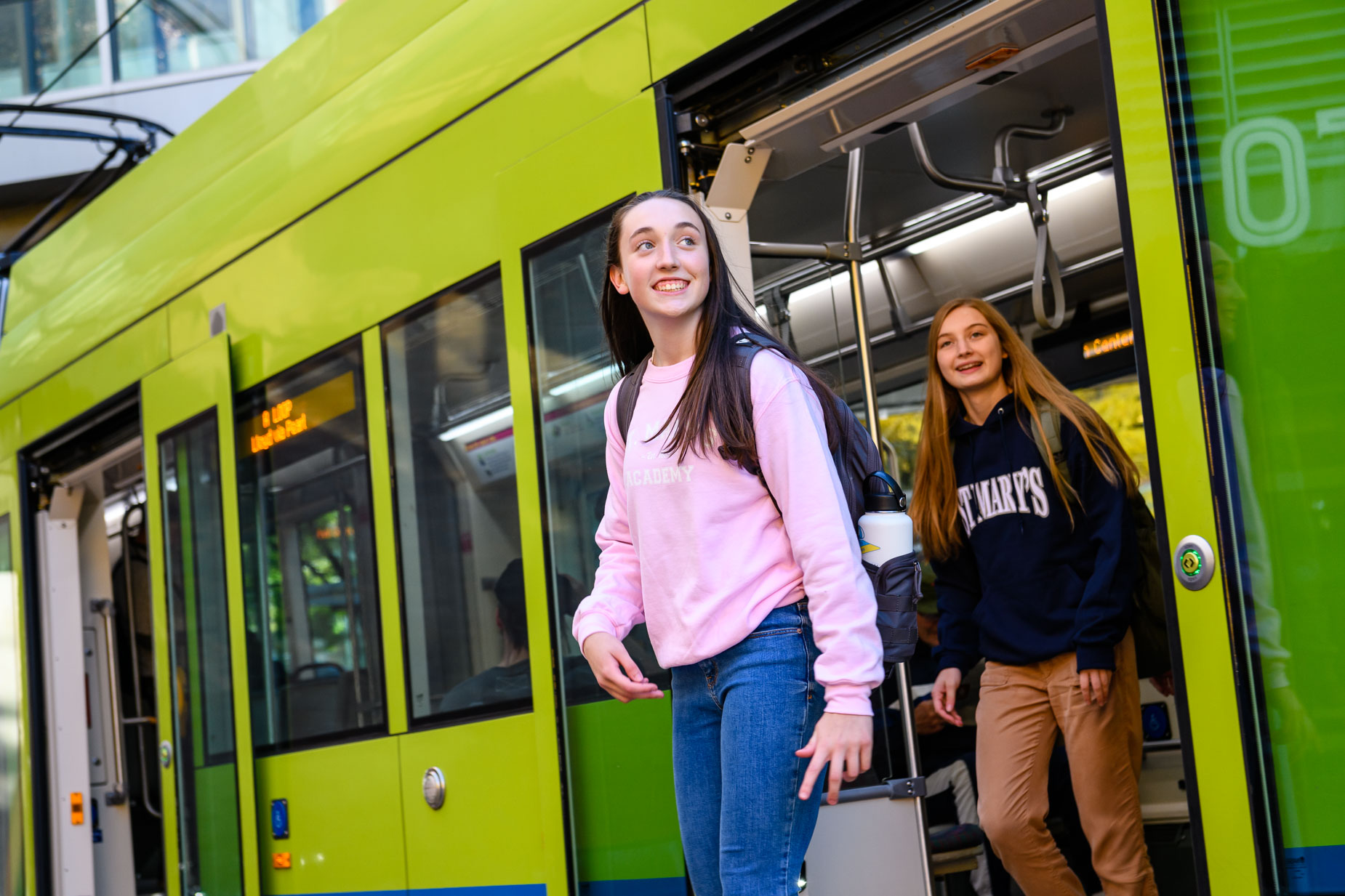 "Our pre-freshman daughter dreaded the idea of taking public transportation to school. She was used to being driven and wanted us to continue to drive her. But we live at a location where both the bus and MAX can conveniently get her to school. We accompanied her the first couple of days and since then, she's been happily riding TriMet. She's met SMA students at her bus stop and along the route, as several of them attempt to make connections to minimize the amount of walking they have to do. For several weeks, she rushed out the door to make the specific bus with her favorite bus driver. Not only did he greet her and share stories but he often waited the few extra seconds for her chronically late arrival. She was sad when he got transferred to another line.

When coming home from sporting practice, she's found MAX to be more convenient. She joins in with the many commuters making their way home.

Not only does having our daughter take TriMet reduce our environmental impact and save from hours in the car each week, but it also has given our daughter the confidence to get herself around town and gives her the opportunity to be in the community every day. We strongly feel she is more independent, resourceful, resilient, and worldly for taking public transportation downtown to SMA everyday. It's been a big part of her growing up." 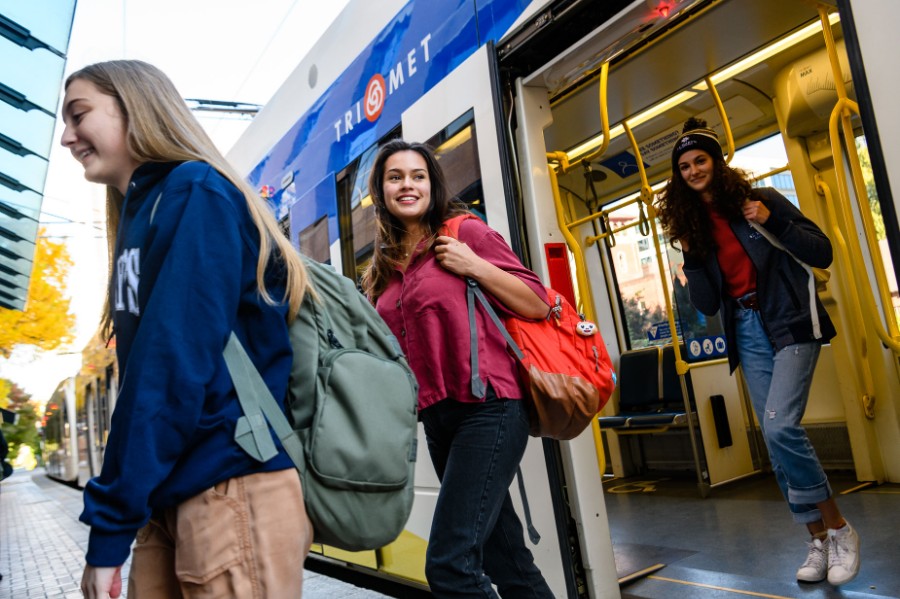 "Our family lives in rural Oregon City and over the past six years, all three of my daughters have traveled to and from St. Mary's via TriMet. In the mornings, we drove the girls to the Oregon City Transit Center (now they are old enough to drive themselves) where they ride the bus and/or MAX to school. During parts of the year, it is dark in the morning and/or the evening. They have never experienced any safety issues, although sometimes they get frustrated with late buses or trains as a result of heavy traffic. It has had the added benefit of teaching them self-sufficiency and confidence in using public transportation. The girls have been able to expand that skill to travel around Portland for after-school activities and summer jobs."  Current SMA parent 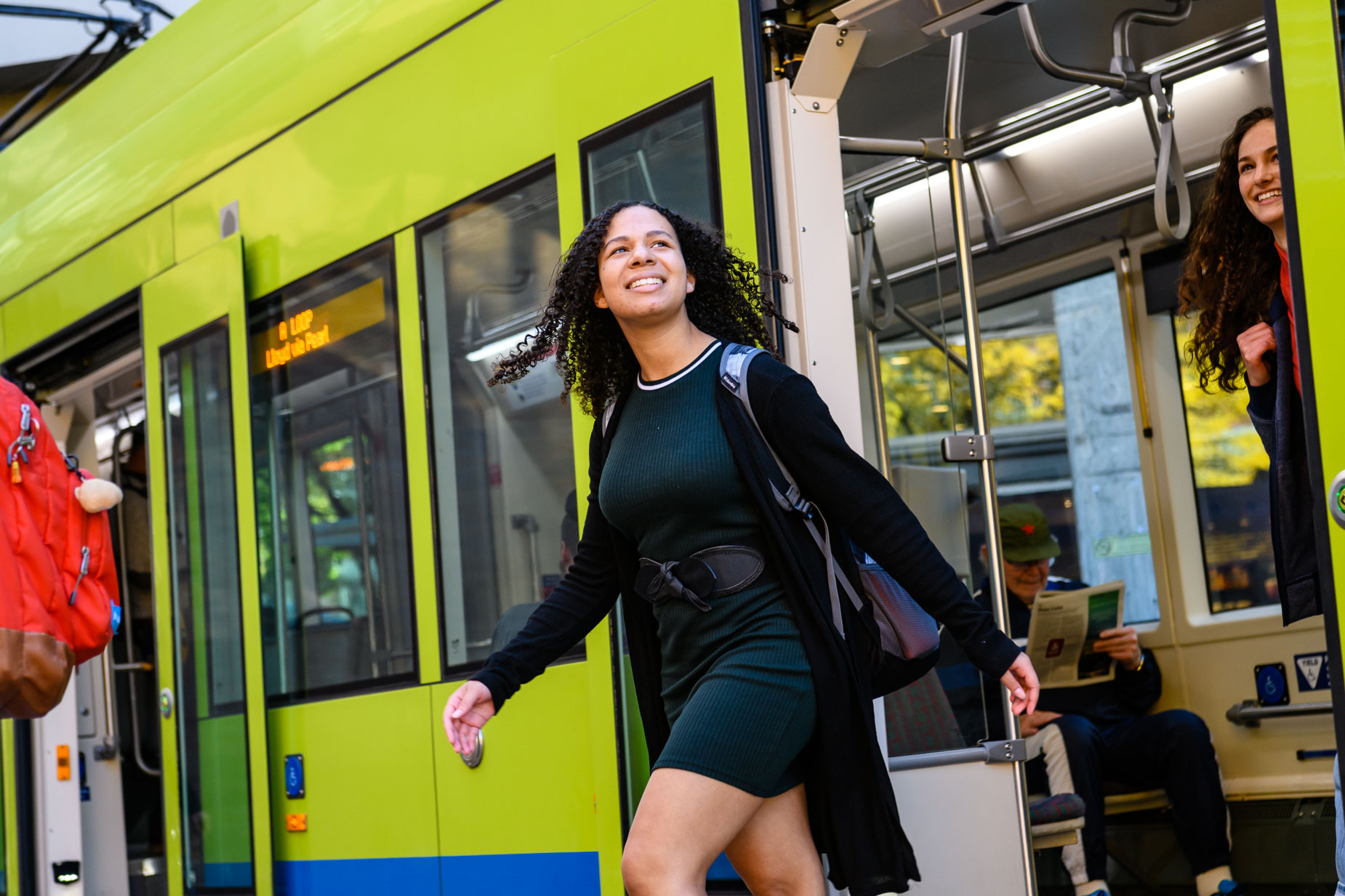 "Not only does taking public transportation offer freedom, it builds confidence too. My Junior was with a friend (another SMA student) in Seattle, and because of their experience at SMA, they were able to figure out the Seattle public transportation system to get around."
Current SMA parent

Portland was named the #1 bike-friendly city by Bicycling magazine for many years running.  The City of Portland offers many resources to help you plan a safe route to/from school on their Bicycle Trip Planning website.  SMA students and faculty use bike racks directly in front of the building. With a security guard at the front entrance, bikes are well supervised.